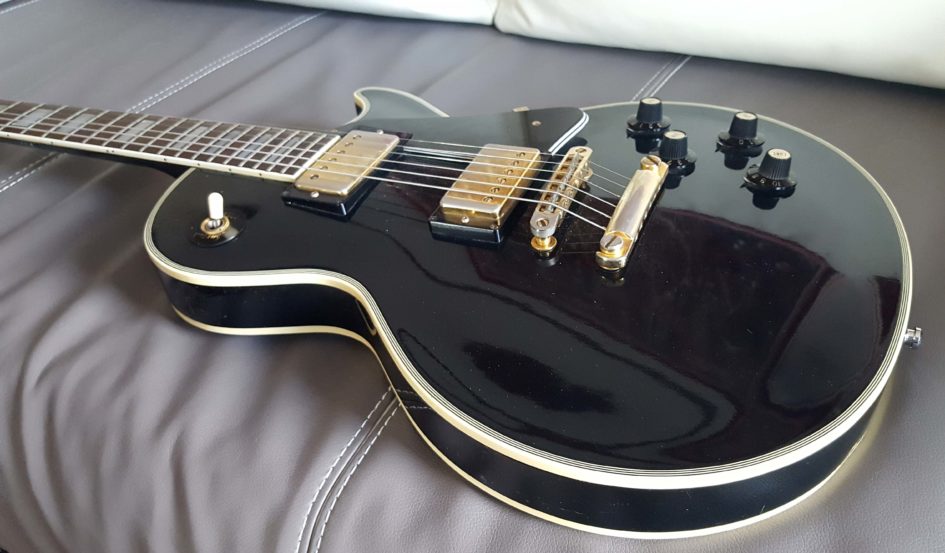 The 2350 can justifiably be called one the most important guitars Ibanez ever made.

It started it’s career in the early 70s and though it was technically much different from it’s role model, the Gibson Les Paul Custom, it was an absolute best seller all over the world and layed the basics of Ibanez’ later success.
The simple reason: It was affordable compared to the Gibson and optically it was a perfect copy of the Les Paul – including the Open Book Headstock, the Headstock Diamond Logo, the gold plated hardware and the binding. It’s simply a beautiful guitar.
If you stood in a distance of about for meters and more from the stage, you couldn’t tell the difference if it was the original or not.

Ok, the body is not solid mahagonay, it is chambered and it has a bolt on neck and many other differences. So, technically seen, it is much different.
But people gave a f*** about it and the 2350 became the best selling Les Paul copy in the 70s.
And not to forget: With first the maxxon humbucker pickups, later with the Super 70s, it had a really good sound and lots of sustain.
Due to the high manufacturing quality – compared to many other cheap Japanese copies of those days – it had a real good playability and on stage it’s lower weight was a big advance especially during long gigs.

Mine is in all original state with Super 70 pickups and still the original tuners. Many of the 2350s that survived until today are heavily modified. Not this one.
Ok, one slight modification: I changed the strap buttons and applied Schaller Security locks – but still have the originals and this is fully reversible.

And it’s one of the few models that still have the Pre-Lawsuit Open Book headstock, the Diamond Logo AND already a serial number.

The guitar has just some minor dings and dongs, neck is straight and the frets have still a lot of life left. 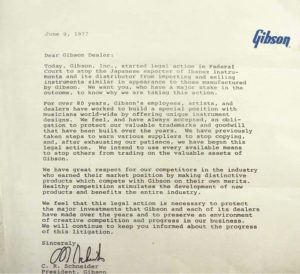 There are many legends about this issue and the fact is: There never was a definitve lawsuit between Gibson and Ibanez. Things changed before a real suit was filed.

In 1976 Ibanez offered about 26 different Les Paul copy models – more than Gibson did. Most were with bolt-on necks – like this 2350 – but some had set necks and came closer and closer to the original also in means of the wood used, massive tops etc. The models 2650 and 2651 in particular were almost perfect copies of the Les Paul – for a fraction of the price.

No wonder Gibson got nervous and wanted to stop this. They focused on the dsign of the headstock – the so called “Open Book Headstock” and on the 1977 NAMM show they wanted to take Eleger, the US Ibanez distributor (in between owned by Hoshink Gakki) by surprise, so that Ibanez would have had an empty booth without guitars.

But Elger/Ibanez anticipated this. Already in 1976, some say even end of 1975, they started producing the Les Paul and SG clones etc. with a different headstock shape and also another logo which some called “Rabbit Ears”. The new headstock shape was very close to the one from Guild but the guys there  obviously didn’t care. 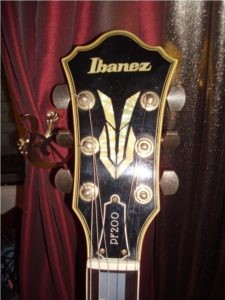 So at NAMM 1977 Gibson/Norlin missed the mark and Elger/Ibanez showed their guitars with the new headstock/logo without being bothered. About 1978 almost all copy models were abandoned. The LP copies were followed by the Performer series with a slightly different body shape – still much LP like but different though. The PF300 and 400 constructionwise were very close to the LP and are sought after guitars today.

Since the “Lawsuit” only covered the U.S., in Europe particulary in Germany, Lawsuit models were available much longer. Obviously all “sensitive” parts wehre shipped to Europe and in fact very few 2651 models were seen with Open Book Headstock and Diamond Logo – perfect LP replicas with an outstanding sound and playability! They are even more rare today and fetch high prices.

A detailed article about the “Lawsuit” can be found here:

The true story of Lawsuit Guitars