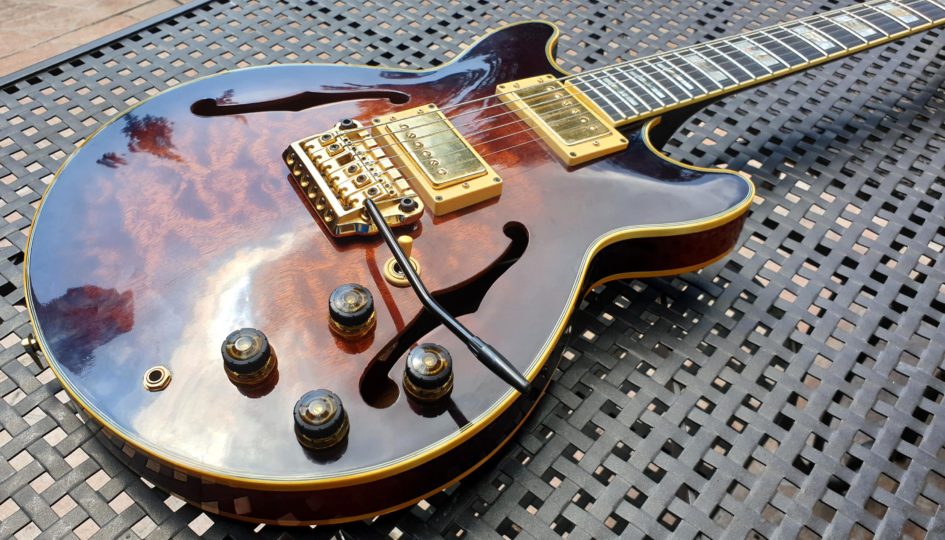 Every guitar has its story – and this is the partially sad one of this Ibanez Artist Stagemaster AM255 AV, built in October 1983.

Last Thursday in August 2020, I was one of the first – or even the first – to respond to an ad in a local free classifieds site, which was published around 9:30 PM.

It showed an AM255 AV from 1983 in – as far as I could see – unmodded and not too bad condition. Some blurry pictures and a very short description but with correct model number.
No shipping, only local pickup. And the price was more than attractive.
So – no matter, what the condition of the guitar was – I had to go for it – GAS*  😉

Checked the location of the seller and Google Maps told me that it’s just an 1 1/2 hour drive from my home. Perfect 🙂

So I immediately wrote, that I will pick up the guitar as soon as possible without any further negotiating (what some others obviously did!) hoping for an answer other than “Sorry, already sold”.
And after some minutes I got the answer I was hoping for. “Yes guitar is still available. Pickup  could be done Saturday afternoon”.
Perfect ! 🙂
Friday afternoon I just wanted to confirm our pickup schedule and got the message that someting has come up and pickup can be done either right now or early saturday morning – too early for me 😉
So I decided, to immediately head to the seller’s place, a little town called Filderstadt close to Stuttgart in Baden-Württemberg, Southern Germany.
And once again: God bless the German Autobahn 😀

I was received very kindly by a very nice lady who never played guitar herself. Her cousin bought the guitar in 1983. He was, as she told me – a real good player who had quite a bunch of guitars and also built himself a home recording studio.
Unfortunately in 1986 he died in a motorcycle accident. His parents sold all his stuff except the Ibanez which they gave to her in memory of her cousin & best friend. The next 34 years the guitar was sitting in a closet without ever being played or maintained or something else.

And that’s how the guitar looked like: No structural damage as far as I could see. But dust and grease everywhere. Electronics probably corroded, the neck pickup was sitting somewhat tilted in its cavity.
And one part of the Hard Rocker Trem bridge is missing (can be seen on the detail pic of the bridge).
But thanks to Andy from www.reproguitarparts.com, the part is already on it’s way to me. Hope USPS will get it shipped before Trump will wreck that time-honored American institution.
Addendum:
Meanwhile the part has arrived and fits perfectly, the AM255 is complete again 🙂
And Trump is no longer president and hopefully will be locked up ASAP!

There were .12 gauge strings on it, what – due to the much higher tension – pushed the whole system completely out of balance.
The strings were rusty, the neck somewhat bent in a convex way and the tremolo stood in an angle of maybe 30 to 40 degrees from the body.
As you can imagine, the action was really high, even if I bent the trem back to be parallel to the body.

All in all: A complete overhaul was necessary. The guitar definitely has been played by it’s original owner but the frets still have mor than 80% life left.

Two day later I finished reassembling and gave the guitar a complete new setup.
After putting .10 gauge strings on it and some hours of adjusting the truss rod, lowering action, tuning, readjusting etc. etc. in many turns I’m comfortable with the result.
Since you have to loose the strings almost completely if you want to adjust the height of the bridge/trem (and also for adjusting the truss rod) this is very, very time consuming and you really need some patience.

Last thing I did was setting the intonation right (which was quite ok, so I assume there were 10 gauge strings on it years ago ) and now the guitar is ready to play 🙂

Tested it and the sound is amazing. Especially the clean sound of the Super 58 neck pickup is stunning – full, warm and a good punch if you need it.
It has much more of the semi acoustic character, as you would expect from the small body (compared to ES335/AS-200/2630 like guitars)
I know why those Super 58s belong to my favorite pickups.

Also lightly distorted, crunchy sound with the neck pickup are great and well balanced without getting muddy.
And even fully distorted lead sounds with the bridge pickup really sing with my 100 Watts Tube Top and 4×12 Celestion cabinet.

Though being a semi acoustic it doesn’t have the tendency to start squealing early, so you really can play at high volumes if necessary.
This for one part is owed to the Super 58s which are really perfect for this guitar and not as harsh as Super 80s IMHO sometimes sound.

As far as I have seen, the AM255 never appeared in any official Ibanez catalog. Its sister model, the AM205 with hard tail bridge did. The only occurence of this guitar I found is an an ad from about 1983 where the AR150, the Roadstar 1010SL and the AM255 are featured – all thre equipped with the Ibanez Hard Rocker Pro trem, which was developed by Ibanez but only used for one year or less.
To be honest: The tuning stability of this trem is not overwhelming, which maybe could have been improved by a locking nut – but there is none.

It’s successor was the Pro Rock’r trem as it appeared i.e. on the RS1300, early AR-350s and several other guitars. This is a locking trem and if well maintained it provides good stability.
But there’s a reason why in 1986 Ibanez licensed the Floyd Rose Trem and called it “Edge”.

Nevertheless the guitar is a real beauty and it’s fun to play.

Addendum:
To make the Trem somewhat more stable, I installed the Rockinger BlackBox Tremolo Stabilizer and it does a really good job.
The trem is not a stable as the Edge/FR on my AR350PLT but it’s much better now. Also muting the strings with the right hand doesn’t affect the pitch anymore and when tuning, the strings don’t affect each other. A big benefit for smal $$$.

The BlackBox and how I mounted it is shown int the last pics oft the gallery. Since the wood of the guitar’s construction was too short for mounting the device, I had to insert a small piece of wood to hold the rear screw.
All changes are fully reversible.