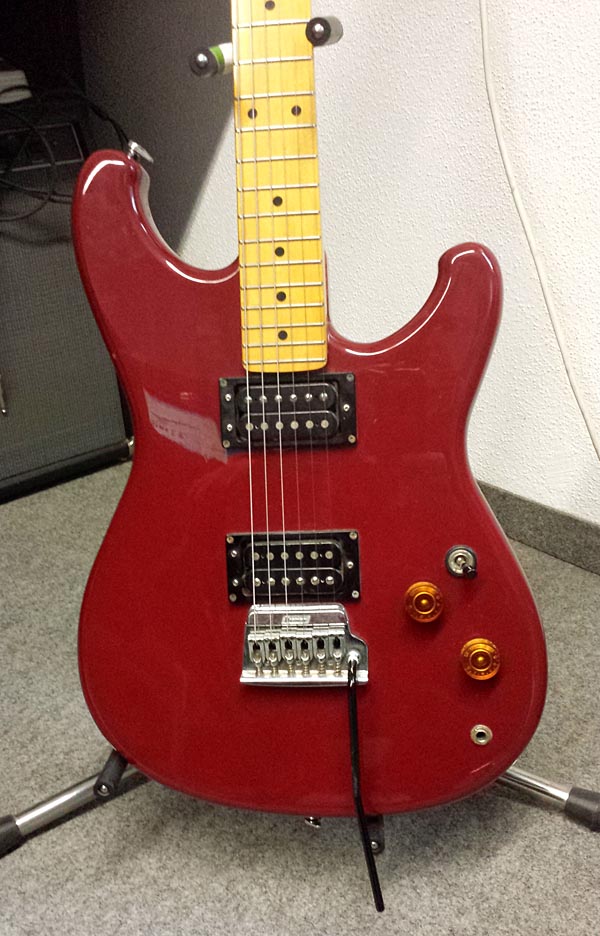 The Roadstar II series followed the Ibanez Blazer series and was introduced in 1983. While the Blazers still were more inspired by the Fender Stratocaster (I call my BL550s “The better Strats” 😉 ) the Roadstars were available in a HUGE varietey of models, some Strat like but more and more going towards the Superstrat concept with HSH or SSH pickup configuration, that emerged around 1985.
Today the Roadstar II can be seen also as the predecessor of the RG series which is produced until today.

My first Roadstar was a dark red RS225 BY (BY = Burgundy) which I got as a Xmas gift around 2000.
It was in almost mint and 100% original condition and equipped with two coverless black Super 70 pickups. The bridge construction is a PowerRocker trem with quite good tuning stability.
Body is basswood and birch, neck a one piece maple construction.
The pictures show the guitar with Speed knobs, but I changed them to SureGrip IIs. Don’t have pics of theat anymore.
Playability was great and the action low. The two Super 70s produced a warm bluesy sound while the neck pickup also really could scream.

But for some reason I never really got “in contact” with that axe. Maybe when looking at the body shape, everthing shouted “Strat, Strat..” but it wasn’t.
The sound was good, but much different – and not what I expected unconciously.

So this RS225 is one of the very few Ibanez guitars I let go some years ago – with only little regret.
But I still have got one other Roardstar II: A beautiful 1984 RS1300 with two Super 58s which I will add to this site soon. And this one is a keeper 😉