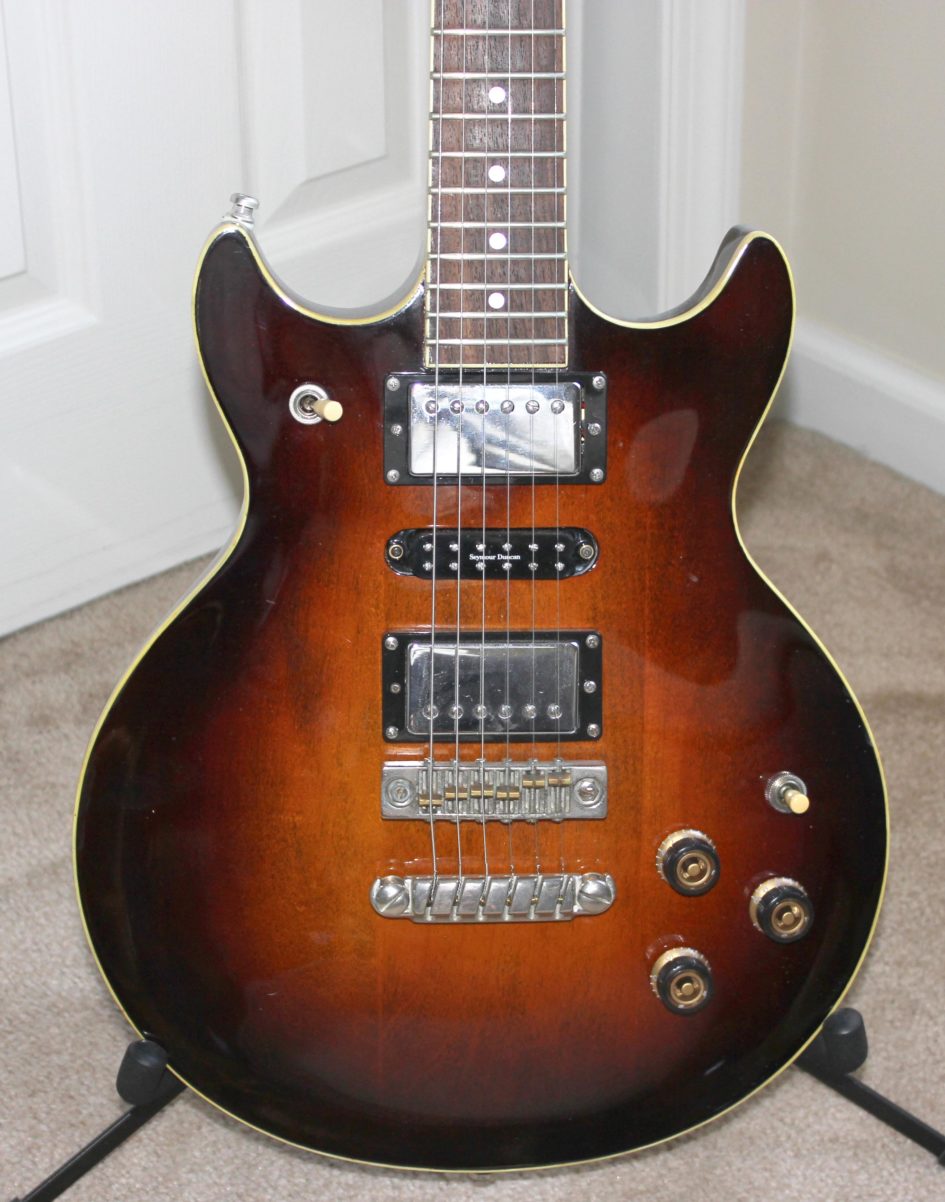 What we have here is an Ibanez Artist built in 1981. I just have some pictures available, so some statements can only be derived from the pictures.

But it’s not an AR-100 or 300, since the hardware is Chrome, not Gold as all the other Artists used to have. It also seems to have the thinner body style like the Artists until 1979 and its predecessors, ther 2618/2619. It has no cloud ornament, also no drill holes can bee seen where cloud might have been. Tuners apparently have been changed but at least without drilling extra holes.

The bridge is a Gibraltar I type, but the tailpiece is not  Gibraltar, it’s the same type as it used to be on the AR50. Since the hardware of the AR50 was chrome too, the base model for this guitar could have been the AR50 which only was available with solid coating, not with Antique Violin finish like this axe.

But what catches the eyes immediately is the third single coil pickup in the middle made by Seymour Duncan. As far as it can be seen from the pictures, the pickup routing is genuine and not some aftermarket modification. The pickup might be newer.

The guitar also has (or had, just have pics) an active electronic. On the back of the guitar you see a battery compartment which also looks genuine. Unlike on the AR500 or MC500 it’s directly above the rear strap button.

Consequently the controls ar somewhat different, too. The contol positions are the same as on standard artists, no extra mini switches etc. But it only has three pots and at the position where you expect to find the bridge pickup volume there is another three way toggle switch which obviously is used for the middle single coil pickup.

I hope to have some more images available soon which show the back sides of the pickups and the inside of the control cavity that might shed some light on the kind wiring.

If anybody of you has more information about this guitar or has seen or even owns the same model, please feel free to post or leave a comment here.

Some more detail pics from the control caity, the pickup routings and the pickup backs.

As far as I can see from the control cavity, there is no active electronics in the guitar. There might have been one earlier, but if, it was removed.

The electronics is definitely modified:

One of the pots (the one with the “S” engraving) is from another manufacturer than Ibanez used in the 80s. Also one of the volume pots has got the so called “Treble bleed” modification (that little orange drop, a capacitor plus a resistor). AFAIK this kind of circuit never was used in a 80s stock Ibanez guitar.

The pickups apparently are newer Korean made  Ibanez Super 58s from after 2000 or even newer. At least the one with the SP-58-R sticker (R = Rear = Bridge-Pickup). So the other one looking very similar probably is a SP-58-F (Front = Neck Pickup). They are both wax potted. Don’t know if that is stock. But when the sticker is on it, it might be.

When searching for the text on the pickup stamp, I found this old ICW thread:

Also remarkable: The bridge pickup cavity seems to be genuine, the neck one obivously has been painted.