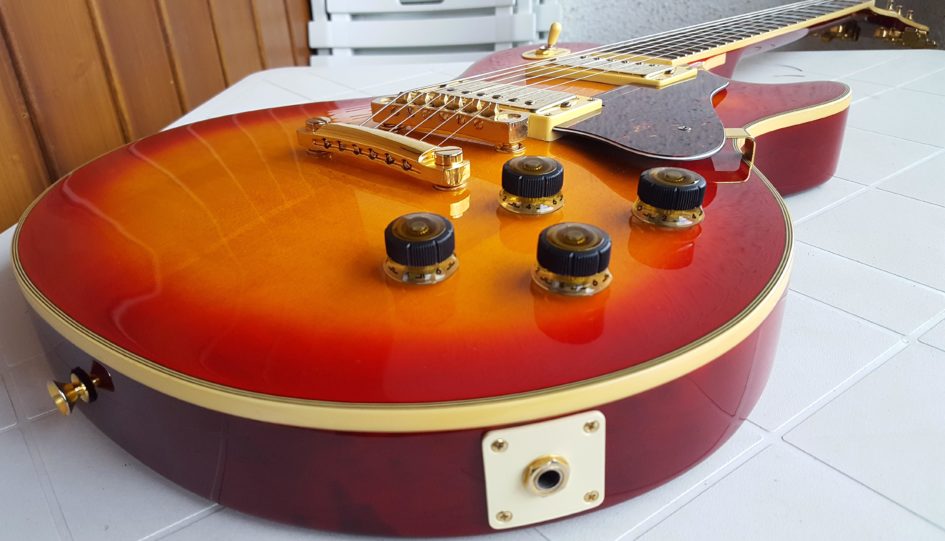 The Performer series was one of Ibanez’ answers to the so called “Lawsuit”.
They not only gave the copy models like the 2350 a new Guild like headstock. Hoshino also stopped production of the copy models – even if they were sold until 1978 – and in 1977 they launched the Performer series.
Performers were very much LP like but with an obviously different body shape and headstock. In terms of construction the main difference to the LP was the neck material: While the Les Paul has a Mahogany neck, all Performers had maple necks.

Since Hoshino/Ibanez in 1977 and 1978 also introduced the new Artist models 2618 and 2619 as well as the Musician which both were genuine Ibanez designs, the Performer was like n old fashioned competition to the own models. So the Performers were’nt featured much. In 1979 Ibanez cleaned up the model palette and only a PF150 and a PF350 survived which were only sold in Europe. The PF150 was a low end model and the PF350 had more or less the same specs as the PF400.
In 1981 the production stopped and from the remaining parts there were models appearing called PF160 and PF360, both equipped with the new Super 58 humbuckers. The PF-160 was very much like the PF-150 while the PF-360 was very close to the PF-350 but didn’t have a Tri-Sound switch. Instead it had two Push/Pull pots which switche both humbuckers in to single coil mode.

The guitar shown here is a Perfomer reissue from 1994 built at Samick in Korea which mainly was sold in Europe with rather low production numbers. It never appeared in any catalog. The construction is close to the PF-360/400. Pickups are Super 70 (probably with Alnico magnets) but there is no Tri Sound and also no Push/Pull pots. The playbility is good and manufacturing quality is close to the Fujigen standard. Only the fret ends were a little sharp.
The sound was somewhat treble emphasized, maybe due to the Alnico pickups or the maple neck or both.

At the end of the day I didn’t really connect with the guitar and so after some months decided, it had to go.