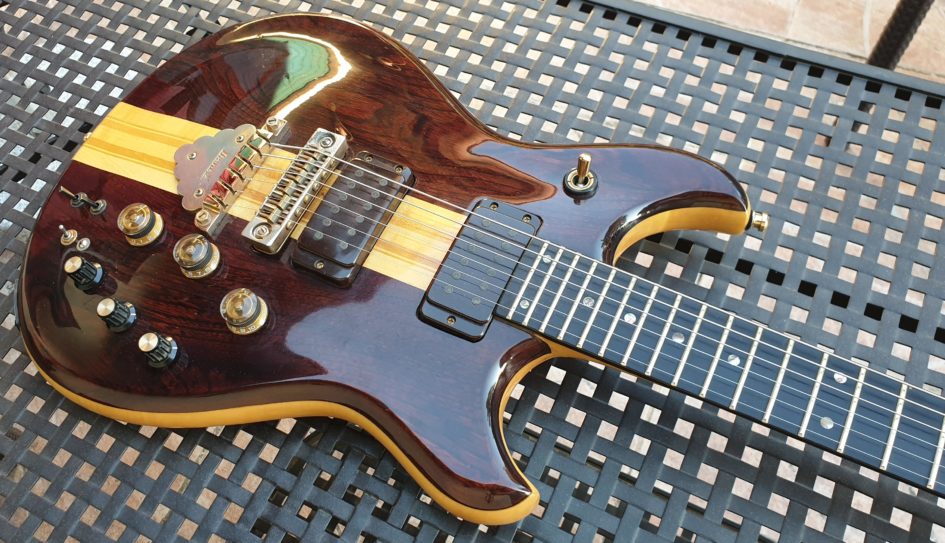 The MC500 DS was the top model of the Musician series which was introduced by Ibanez in 1978 as the third main product line beneath the Artist and the Professional series.

It has a Strat-shaped body and obviously was inspired by the Alembic design. All Musicians – except the entry-level MC100 had a Neck-Throug-Body construction. The pickup setup was LP-like with 2 Super 88 Humbuckers which had the Tri-Sound-Option in the mid- and highend models beginning with the MC300 which is probably the most sold Musician.

The Top end models MC400 and MC500 (later the MC550) had  active electronics with a booster and a 3-band-EQ. The same curcuit as used in the AR500/5000 and the legendary model 2700, which basically was a Musician with an Artist body shape.

There also were some limited models, the rare MC3000 (30 made) and ultra rare MC5000 (3 made as NAMM show pieces) and the MC300LTE which AFAIK was only sold by Meinl in Germany with a number of 150 guitars made.
I’ve got one of them 🙂

The main difference between the MC400 and MC500 was the body construction. The MC400 had a flat shaped body, the MC500 was curved.

Both had a sandwich construction of three wood layers. The MC400’s body was Ash/Magogany. The MC500 was made of Ash/Maple.

In it’s short lived history from 1978 to 1982 there were many model and spec changes which are described very detailed in the ICW thread linked below and also on the (German spoken) website www.guitar-letter.de (see link below) so I won’t repeat it here.

One of them IMHO most important changes in respect to flexibility and playability was the introduction of the master tone control for the MC500 and later the MC400 (only few modesl seen with MT) somewhen around 1979/80. Before there was only a master volume and boost control. Tone had to be controlled with the EQ which was no problem in the studio but tricky on stage.

My MC500 DS, which I also bought from ICW member Ollie in Septermber 2010 has this master tone control and also the smooth heel neck plus the 9-ply neck made of 9 different layers of wood. The guitar is in very good shape except some small dings & dongs and in abolute stock condition (except Schaller Security Locks, but also here I still have the original parts).