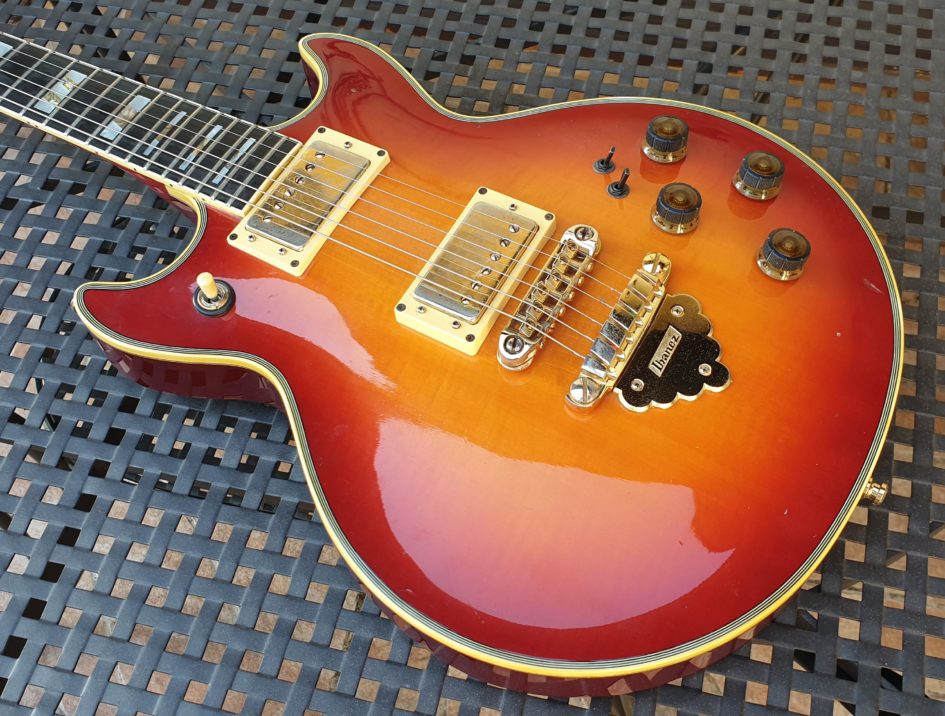 This is the guitar many people were dreaming of back in ’83.
And me too. But as a poor student the Ibanez AR300 – not to speak of the AR500 – was way beyond my financial horizon*.

There is hardly somebody playing guitar in the 80s, who doesn’t know the “Catch The Tiger” ads in all polpular musician magazines back then.
The AR300 justifiably can be called one of Ibanez’ best selling guitars and the model that brought the Ibanez brand into the consciousness of guitarists all over the world.

And there’s good reason why the Artist models of the late 70s and early 80s were called “LP Killers”. The writing “The ultimate expression of craftmanship” on the control cavity plate was not just one other nice advertising slogan. In those days it just was the truth! This may sound like another marketing speak. But whoever just held an AR300 or was playing it, knows about it.

There were so many details that really made a difference when comparing the Artist series to other brands.
One for instance was, that all the controls were placed in a metal shielding box to avoid hum. Not to speak of the superior processing quality.

Ok, after I rediscovered Ibanez and luckily wasn’t short of money, in February 2011 I bought this AR300  from a guy in Ravensburg, Southern Germany for a decent price. It came with an OHSC and was almost perfectly set up.
Just a few dings & dongs that can be seen on the pics. Some TLC, cleaning and a new set of 10 strings and the AR300 was back on the road.
Everything is 100% original exept the strap buttons which I changed to Schaller Security Locks. This is what I do on EVERY guitar I purchase, to avoid any unnecessary damage. But I kept the original “Dead End Strap Posts”.

The AR300, which also was available in Black, Antique Violin and Marin Blue finish basically hast the same construction principle as the Les Paul:

A Mahogany body with a thin maple top, a maple neck and an ebony fretboard. The Super 58 pickups are much like their LP role models with a bit more punch and a warm, balanced sound that allow almost all styles from Jazz to Blues, Rock and even heavier tunes.
The wiring is almost the same as the LP: A volume and tone control per pickup plus a toggle pickup switch. What makes the AR300 much more versatile are the Ibanez Tri-Sound-Switches, that allow to switch the Humbuckers to either standard Humbucking mode but also Single Coil and parallel wiring of the two coils. The Out-of-Phase option offered in it’s predecessor model, the 2619, which was built until the end of 1979 was abandoned in favour of the parallel option.

Another noteworthy feature of the AR300 is the sustain block mounted below the Gibraltar II bridge, a solid brass block tightly mounted into the body with the purpose to give that axe sustain for days.

*) What I bought instead was an Oakland ZX1200. A MIJ guitar too but made in the Matsumoko factory. The price was 300 German Marks cheaper than the Ibanez and the music store accepted deferred payment. Deal!
It’s a great guitar with neck through body, 24 frets, 2 DiMarzio Super Distortion Humbuckers (Bridge PU replaced with a Bill Lawrence, Single coil middle pickup added to make it a little like Jerry Garcia’s ‘Wolf’), coil switching and active electronics (a booster, no EQ) – the ‘Poor Man’s Alembic’ 😉
I still own it and it was my main stage guitar for many years. Just look at the pictures in the second gallery.