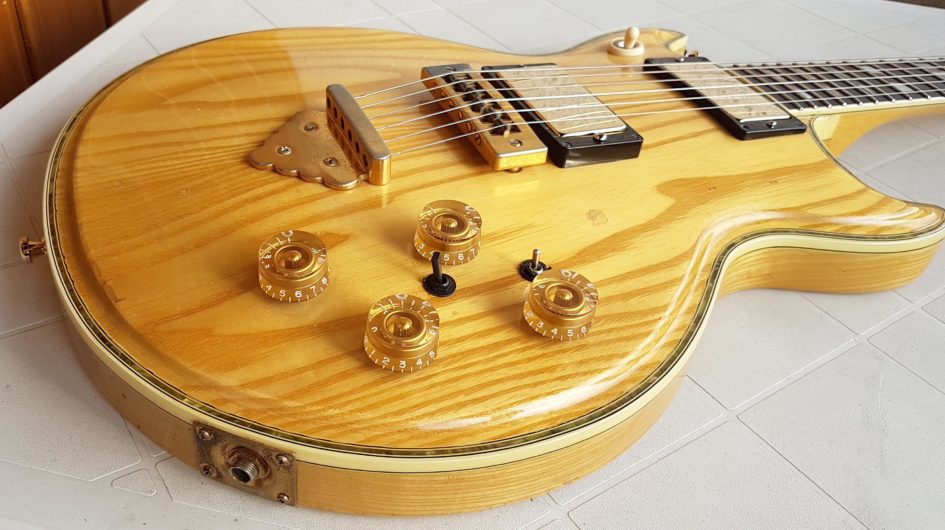 I bought this guitar in June 2017 from a guy in Northern Germany. It came with several modifications like two added mini switches which had no function. Also the pickups were changed to two NoName high output humbuckers.
To make it perfect, some “amateur luthier” had tried to do a refret with really bad quality.
But except for some dings & dongs the guitar structurally was in good shape and the price was ok.
The binding has no issues and is in perfect shape and the blonde ash body has that unsurpassed German Carving like the sister models 2680 and 2861 or the “Holy Grail” 2670.
The 2617 was build in December 1976 and can be assigned to the second version of this model run. Leo’s 2617 is a pre-serial and probably one of the first models built.
It already has a Harmonica bridge and the Ibanez cloud ornament but still the tailpiece integrated version, while the later models (Version 3) have the Gibraltar I bridge and tailpiece with the cloud as an extra part.

Due to the added mini switches it didn’t make sense to try to put it back to original condition.

So I decided to make the best out of it. First I gave it to BTM Guitars, a guitar shop in Nuremberg who employs two professional luthiers and one of them did a great job in a perfect re-refret.
Since I also own several Ibanez Artists with the original Super 80 pickups, I decided to add some sound variety to my collection and mounted two different pickups I had in my spare parts box:

The neck pickup is a Gibson Classic 57 which is really singing in neck position. The bridge pickup is a 4-wire 1981 DiMarzio Super Distortion providing an awesome lead sound.
The luthier in Nuremberg told me, it wouldn’t make sense to try to fill the extra holes drilled for the mini switches. No matter how much time (and money) you spend – they will always be visible.
So I decided to give them a useful function: The left switch puts both pickups in Out-of-Phase wiring in the PU switch middle position. The right black one (same as on Vintage Artists) is a Tri-Sound-Switch that allows to use the DiMarzio in Humbucker/Single Coil/Parallel wiring – same way as i.e. in the AR-300 or MC-300.

To be as close to the original condition as possible I ordered two Super 80 pickup covers at Andy’s store Repro Guitar Parts, which fitted perfectly on both pickups.

In my spare parts drawer I also have a mint NOS Cloud/Tailpiece and a NOS Harmoncia bridge. Both still sealed in the original packaging. I considered mounting them on the guitar, what would look absolutely awesome. But since both parts are working well and represent the history and character of this meanwhile 44 years old axe, I decided to leave them in.

The result is a great looking and sounding guitar with a killer tone, a huge sound flexibility and perfect playability.
Not collector’s condition but the ultimate work horse on stage.